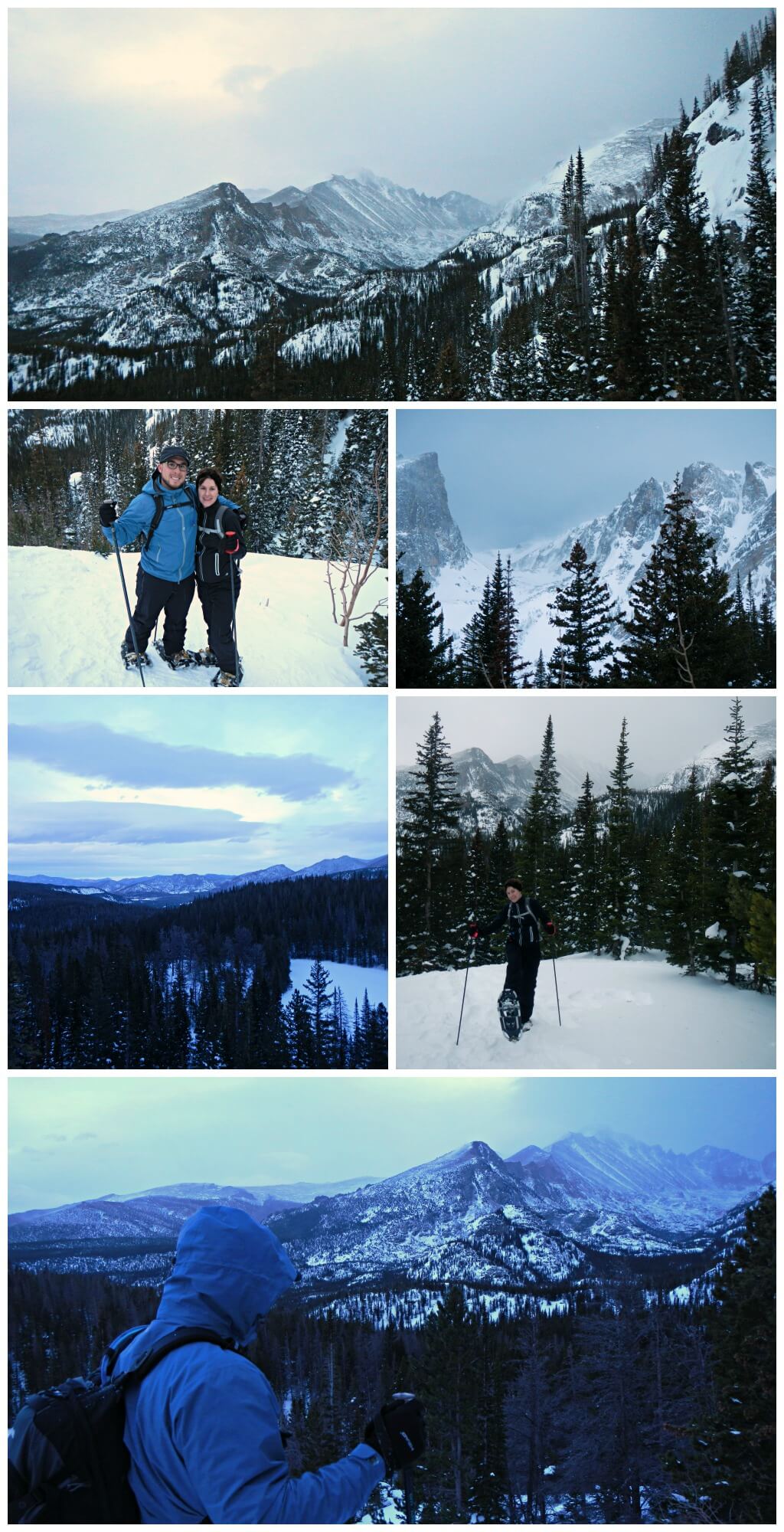 This past weekend, some people form Anthony’s work were getting together to go snowshoeing, so we rented some gear and invited our landlady, Susan, along.

We met in a parking lot, where we asked the group leader for directions, but all we got was a laugh, and “Rocky Mountain National Park,” as a response. We’d checked the map before, so had a vague idea where we thought we should go, and everyone headed off.

We kind of thought it was strange when we saw one car take a different highway, but didn’t think too much about it as the GPS showed the park to the north.

An hour and a half or so later, we arrived at Rocky Mountain National Park and didn’t see the group anywhere. After a quick phone call, we learned that they went to a different entrance, on the other side of the mountain. Of course. It would have taken about four hours for us to get to where they were.

Not to give up so easily, we decided to snowshoe where we were. It was supposedly an easy hike around a few lakes, so off we went, down a twisty and icy road.

During this trip I learned a few things: 1) I’m still out of shape, and 2) snowshoeing is like hiking, but harder.

We hiked for a while, maybe a mile, and it was really pretty and kind of… magical? The soft snow and tall trees made me feel like I was walking through a forest in Narnia or something. But it was starting to get dark and we could see a big storm coming in. Not wanting to be caught in a storm or out in the dark with no lights, we called it quits early and turned around. But not before taking a few photos, and sliding down a big hill on our butts as it was too steep to hike down.

The ride back was kind of scary, as it was dark, extremely icy, and there was thick fog. I’m glad Anthony is a good driver.

I’m not really sure how I feel about snowshoeing, it wasn’t much of a trip and we really got started entirely too late so were in a rush the entire time. I’d like to try it again, earlier in the day and planned better.

Oh, and the day before I’d gone snowboarding, and while I spent a lot of time falling down, my legs were BURNING before we’d even started the hike. I’m not sure how I feel about snowboarding either. It’s hard, and falling scares me. So does going fast. I’m not really sure winter sports are my thing.

I’ll have to give both snowshoeing and snowboarding another go, and see how I like them then. I’ve really got to work on my leg strength; I was telling a friend that my new fitness plan involves me doing squats on my toes for an hour or two at a time, while occasionally falling down and getting back up without moving my legs or using my arms. I was only half joking.